The Tale Of A Letterbox 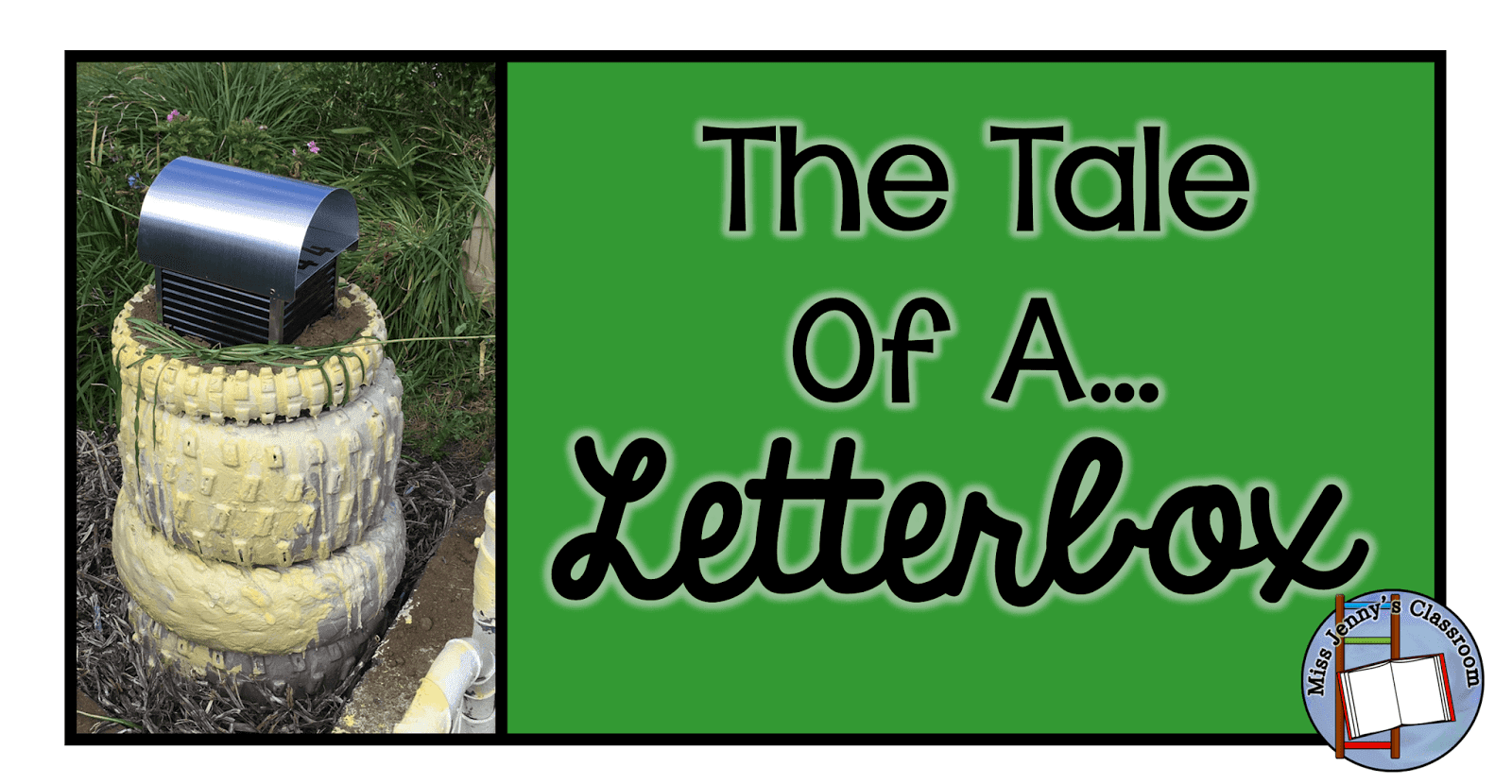 What do you get when you have 4 tyres, 5 tins of paint (you have no idea of the colour), and a new letterbox? A piece of functional art!

The new letterbox (mailbox) has been a few months in the making. My toddlers and I got the two large tyres undercoated with some creamy paint about 2 months ago but weather prevented us getting any further. Low and behold we got a 21 degree day!

To make our version of a letterbox we used:
The Beginning
To start with we painted the three larger tyres. The original plan was to have the larger one on the bottom and then the two smaller ones on top...we changed that though on the day.

The paint we used was oil-based (yep, learnt a lesson there! If you're not sure what I'm talking about it's that oil-based paint is a wee difficult to remove...so my kids had paint splatters on them for a good week before it finally washed and wore off - so my advice is to always check the label!). All the paint used was obtained for free from our local Waste Transfer Station. The local council had recently (unknown to me at the time) began collecting paint tins with paint to dispose of eco-friendly. They were more than happy for me to have a dig around in the crate. 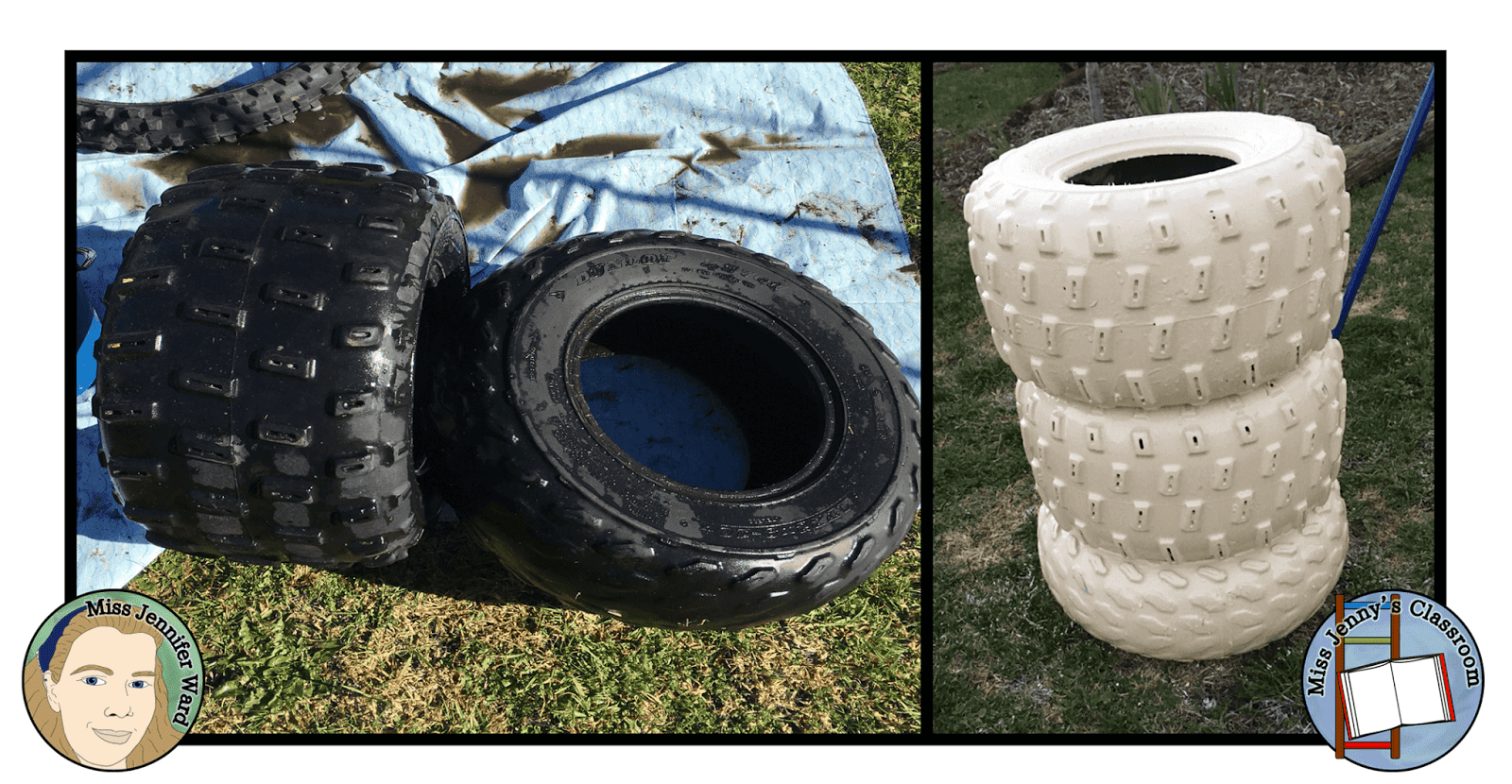 The Building
Fast forward a couple of months and we got the nice day we had been waiting for. After much debate and rearranging my kids decided they wanted 1 smaller quad tyre, the 1 large tyre, and then the smaller quad tyre. At this point I thought the 3 would be high enough.

With the ground leveled my kids, well mainly my son, began excitedly fill up the first tyre with dirt. Once filled we put the next tyre on top and filled it, and then repeated with the third. At this point I noticed that the tyres were leaning more than a little forward...reminding me a bit of the Leaning Tower of Pisa - but a bit of wiggling straightened it up.

At this point I realised it was a little low and so I grabbed a spare tyre from the backyard (all the tyres came from a local motorcycle business free of charge) and popped it on top. 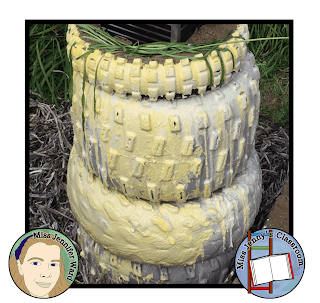 The Painting
My kids had been at me to "paint" for months. While I was straightening the tyres they went and grabbed the tins of paint from the shed - four sample pots. For the record we had no idea of what colours they were which added to the excitement of the activity.

In the end the colours we opened were: a deep cream, a mint green, an iced coffee brown, and a bright-bright yellow. 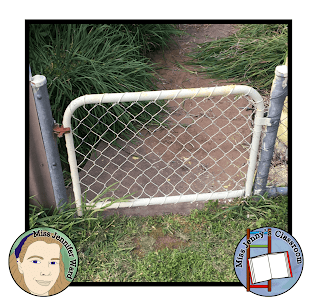 There were no rules for painting except to cover all the black...and off they went! You will notice they tried to paint the fence as well - the gate they finished - the fence - we'll work on that another day!

I encouraged them both to experiment with mixing the colour, swirling, splattering (my son liked that method in particular), and swiping.

The Drying
As it was a nice day it only took about 30 mins for the paint to be touch-dry - we occupied that time digging up some weeds.

I slipped in two pieces of wood into the top tyre to be able to screw the letterbox to it - so if anyone tries to make off with the letterbox they'll need to take the tyres too! The numbers were popped on the top. 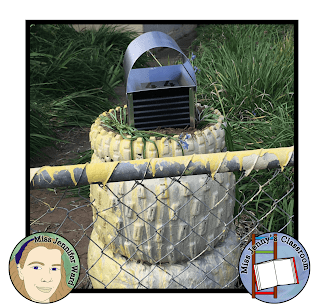 The Reflection
Overall I was really happy with the end result. It may not be everyone's cup-of-tea but the fact that we worked as a family to create it makes it perfect in my books.

The little bulbs we popped into the sides may not make it but we're on the look out for a cascading native to add there later on - that way the letterbox, and all the dirt underneath it, has a chance to settle and be topped up if necessary.

I think my local posties will be pleased as well to not have to reach all the way over the fence to try and tackle my old letterbox anymore!