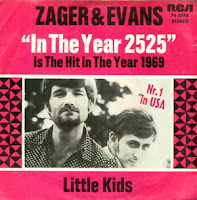 Embrace
It's a bouncy, catchy tune! That aside it is an interesting viewpoint of what the future held in 1964 (when the song was originally written). 52 years later...oh gosh! The song is still as relevant as when it was written.

It isn't the happiest prediction for man and woman - in fact, the song is really about a dreadful life we end up having due to technological advances taking over every part of our lives...The only other point to make is that this song does mention "God" and the "second coming" - see my discussion below about that.

Thoughts
This is actually one of my Mum's favourite songs - and I love it to. I first decided to use this song in the classroom about 8 years ago. You should have seen the reaction of the class when I told them when the song was a hit...groans galore...but after making it through one play it strangely had woven its spell over the class...and was played many, many more times.

So how did I use it? I used this as part of a writing task that was to connect the present with the future. The class were given a copy of the lyrics and, as mentioned, listened to the song. They were then required to write their own version based on their own opinions about what would happen in the year 2525 until 5555 (after that was optional but many completed a full song). The students were required to stick to a similar rhythm and rhyming structure where appropriate.

Once the new lyrics were written many went on to illustrate their song in comic book style with one box representing one verse of their song. Honestly, it was some of the best work I had seen from the 6/7 class I worked in and even their regular teacher was impressed by the lesson.

I mentioned the "God" reference. There were only a handful of students in the class who were religious and including a song that mentions him in a public school can be tricky business. I got around the issue by stating that the students could interpret "God" in either a religious sense or in a metaphorical sense. By metaphorical I specifically used the example that "God" could represent any large destructive force that could wipe out humans - such as a meteor. The responses from the students were therefore acceptable to all and everyone was comfortable discussing their own interpretation - which is what you want the next generation to be able to do.

The other positive is that this song demonstrates that you don't need swearing and other qualities that appear in modern music - oldies are goldies!

A video of Zager and Evans performing the song is available for free on YouTube.


As the band disbanded a long time ago there isn't a website for the band as they were.
If you are interested though Denny Zager creates custom guitars
and you can visit his website by clicking his logo below.

Rick Evans does not have a presence on the internet due to his own personal reasons
which you can read about in an interview he did with Vicky Hunt over at Reasons2BelieveHim blog.
Posted by Miss Jenny at 06:12:00
Share:
Labels: future, grade 7, grade 8, machines, society, song selection, technology, writing, Zager & Evans
loading..