At The Beginning: Developing Vocabulary 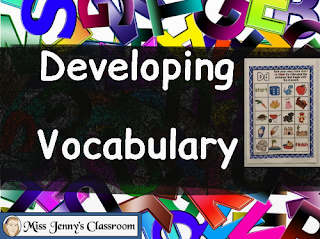 A lot of my blog has so far focused on school age children because as a teacher they are the age I have spent most of my life working with...until I had kids myself. A couple of days ago a parent of a former student was talking to me about how disappointed she was with her daughter's speech development. As her daughter is the same age as my children she asked me what I was doing with them in order to work on the words they know...I thought I would share some of the strategies with everyone in case you are a first time parent, or worried about your own child.

Believe it or not vocabulary development begins the day your child is born. They are like sponges soaking up information as their brains make connections. Children are listening to the tone and rhythm of the language and before you know it a few basic words will appear. Children will start by saying the words they hear being spoken the most.

For my children that meant the first words were: Mama, cat, Doyle (our cat's name), TeTe (for their uncle), car, Grammi, Grandad, and Papa.

Somewhere between 12 months and 2 years of age the vocabulary increases much more quickly. At 2, my children only need to hear a word spoken a couple of times and they can say it themselves!

I started with books. Board, button and fabric books are your friends for the first few years....paper page books are okay but don't be surprised if your little one rips it, tears out pages, or has a good chew on it (especially when teething).

My kids started with basic board books, such as DK's Body book I reviewed the other day. My son was particulary taken with a button board book called Speedway about a racecar driver. Most of the time I didn't read them the actual story (unless it was short) we looked at the pictures and I would (or they would) point to something and I would name it. The same process was used for colours...I am hearing a lot of purple at the moment as it is the "in" colour at the moment for my children!

Look and find books are a good choice around the age of 2 as they often have a double page spread with lots of recognisable pictures. My daughter has a Dora, the Explorer one and adores the playground pages. 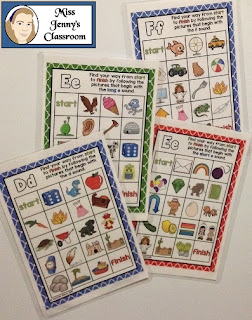 Strangely enough when my children were about 18 months one of my brothers brought up a couple of Foundation/Year 1 workbooks he had found. At the front of the books was a page of the alphabet with a picture underneath each....that became the routine before each meal....the children would sit at the table while I cooked tea and they would say the words they knew by pointing at the pictures. Sadly, these were paper page books and well, with twins there are times when they both want the exact same book....the books didn't fair too well. So I changed my approach... 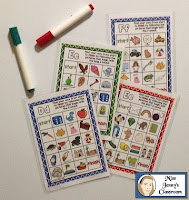 I made up a phonics sheet for each of the letters of the alphabet, printed in colour and laminated. I plan to use them as an alphabet phonics activity when they are old enough to understand that they need to find the pictures whose names begin with the same sound, but until then I just give them each a sheet and they point at pictures and practise saying the words. It's a very handy activity as it makes the children focus on something, it's educational, and it means I can cook knowing they are safely amused at the table. 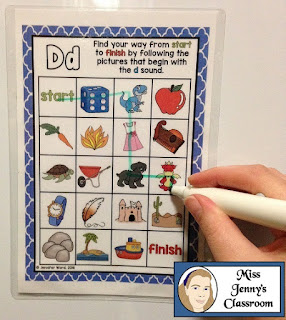 As mentioned, the sheets are designed as a phonics maze. Each sheet focuses on one initial sound such as /b/ or /t/ and the activity asks them to find those words to make it from the start to the finish of the maze.

I would use either whiteboard markers or counters - most likely the markers in the classroom as the mazes can easily be wiped off and used again and there is no fear of finding counters in odd places! 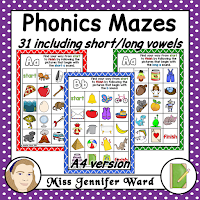 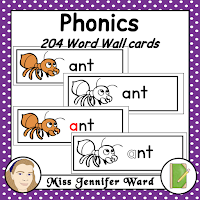