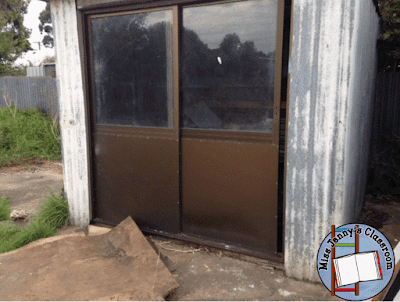 As summer came to an end the other day and autumn began you might be wondering what we've been up to. We have been making full use of the lovely days (even though some have been a little too warm) to get stuck into the garden before winter arrives again.

This year the kids and I have a couple of goals:
* start a vegetable/fruit garden
* get a chook shed together (complete with chooks)

We probably should have concentrated with one thing at a time but at 2.5 years of age they needed the differentiation. Today's post looks specifically at the chook shed.

Oh, and if you are not familiar with the slang term of "chook" - it means chicken!

Firstly, my kids are very big fans of Bobbie - aka Bob the Builder - and therefore wanted to Reduce, Reuse and Recycle - like Bobbie does. The first thing we needed was a shed of some description. Haven given away another shed that was not very sturdy and a bit dodgy overall, I was left with the one pictured.

It certainly isn't the worst shed but far from the best...but in keeping with Bobbie's words I asked my brother to come over to help me rip out the floor. The shed was quite well constructed considering (a previous owner was a bit of a DIY-Man but not everything was done...very well) but the floor was bowing so I needed to find out exactly what was under the great big, thick, heavy boards - and I couldn't budge them myself and the sledgehammer bounced right off.

Enter the older brother (who likewise tried and failed with the sledgehammer) who helped me tear up the two boards. You can see them just in the corner of the photo outside the shed. Underneath we found beams and dirt.....and MOUSE HOLES! Okay, so granted the holes did look like they hadn't been used in a while but it did give me pause to think about a previous owner who complained about there always being mice around in her backyard (Just in case you aren't a regular reader I now own both sides of a duplex - thus how I have insider knowledge about the oddities of property number 2).

The holes were filled with dirt and then we began moving limestone blocks into the shed to form a base floor on one side where we intended to put the nesting boxes, pooping rail...I mean perch, in place. The limestone used had been removed from my house during renovations 3 years prior (so it was about time I did something with it!).

The next pondering was for nesting. As a child my parents had chooks that had free-reign of the backyard and therefore there was poop everything, all the time - not my favourite memory at all. I also remember the shed having to be cleaned out frequently due to knocked over water and poop. These are things I am wanting to avoid. I therefore did what any like-minded person would do....I went to Pinterest for ideas. 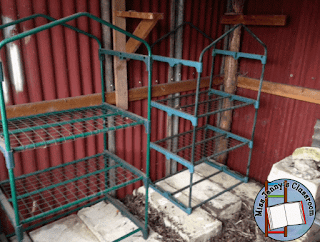 I decided to repurpose two old garden hot houses (that didn't work by the way and the covering perished after a year) that I had been considering getting rid of. At present they are put together but on our to-do list is to use bailing twine to secure the shelving and then the whole structure to the wall. After having second thoughts about the mice I also elevated the stands up with an extra row of limestone. The goal is to have the water and pellet feeders underneath the stands so the chooks don't knock anything over and to deter mice.

The perch was simply left over limestone blocks, a piece of wood that came from somewhere in my house (again during renovations), a piece of corrugated iron (was once part of my fence) and a few rocks that I came across in the garden. Now, if you are wondering about why the iron is there it's because it will be covered by a piece of lino (I need to see if I have any left over and if not apparently there is a local business that gives away small bits for free - yay!). and this is to make rinsing the poop off easier - and hopefully most of the poop will be there - instead of everywhere else. Thanks Pinterest! 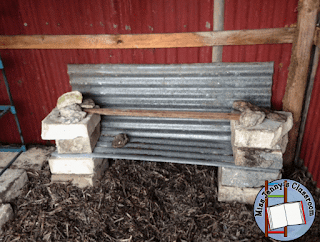 The inside has been topped up with some bean straw that I got from a local farmer - I did pay for this but I got a huge mega bale for just $50 - and he delivered exactly where I needed it - plus, I had gotten it for the garden anyway.

That's how far we've gotten so far but I still need the lino, nesting boxes, thinking about maybe old tyres for dust baths, and the chook run (which is going to be made from PVC pipes because I don't do building).

You might be wondering how much the kids did. Initially they weren't allowed in the shed as there were bolts and screws and other nasties on the dirt floor. Once the limestone blocks went in they helped move the dirt with their mini-spades and wheel barrows before helping stomp down on the blocks. They also moved all the rocks that hold the perch in place and helped arrange them. Finally, they helped move the straw - they were really good helpers and slept like logs each night!

Will keep you up to date with what we do next!
Posted by Miss Jenny at 00:47:00
Share:
Labels: Age 2-3 chickens Chook Shed garden life skills recycling
loading..