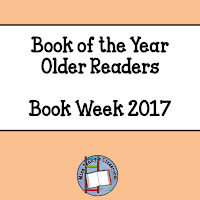 Here is the round-up of books that appear on the Book Week 2017 Short List for Book of the Year: Older Readers category.

This year is quite diverse in style and topics compared to some previous short lists and this is a refreshing change.

Please note: quite a few of these books are new to me so I have taken the summaries from other sources until I can get hold of the books.

When Lowell Sencha finds the strange girl lying as if dead on the riverbank, he is startled to find that she is like them: Waer. Human, but able to assume the form of a wolf. The Sencha family's small community has kept itself sequestered and unnoticed, free from persecution. The arrival of a fellow traveller - and a hunted one at that - threatens their very survival. Lowell and the mysterious stranger are among the few to escape. And now they must find their way to the city of Luthan where, she says, they will find people to help them bring down Daeman Leldh.

Second-hand bookshops are full of mysteries This is a love story. It's the story of Howling Books, where readers write letters to strangers, to lovers, to poets, to words. It's the story of Henry Jones and Rachel Sweetie. They were best friends once, before Rachel moved to the sea. Now, she's back, working at the bookstore, grieving for her brother Cal. She's looking for the future in the books people love, and the words that they leave behind. Sometimes you need the poets

Sometimes, at night, the dirt outside turns into a beautiful ocean. As red as the sun and as deep as the sky. I lie in my bed, Queeny's feet pushing up against my cheek, and listen to the waves lapping at the tent. Subhi is a refugee. Born in an Australian permanent detention centre after his mother fled the violence of a distant homeland, life behind the fences is all he has ever known. But as he grows, his imagination gets bigger too, until it is bursting at the limits of his world. The Night Sea brings him gifts, the faraway whales sing to him, and the birds tell their stories. The most vivid story of all, however, is the one that arrives one night in the form of Jimmie, a scruffy, impatient girl who appears from the other side of the wires, and brings a notebook written by the mother she lost. Unable to read it, she relies on Subhi to unravel her own family's love songs and tragedies. Subhi and Jimmie might both find a way to freedom, as their tales unfold. But not until each of them has been braver than ever before.

If fourteen-year-old Kirra is having a mid-life crisis now, then it doesn't bode well for her life expectancy. Her so-called friends bully her, whatever semblance of a mother she had has been drowned at the bottom of a gin bottle ever since her dad left them for another woman, and a teenage ghost is speaking to her through a broken phone booth. Kirra and the ghost make a pact. She'll prove who murdered him almost twenty years ago if he makes her popular, gets her parents back together, and promises not to haunt her. But things aren't so simple, and Kirra realises that people can be haunted in more ways than one.

Frankie Vega is angry. Just ask the guy whose nose she broke. Or the cop investigating the  burglary she witnessed, or her cheating ex-boyfriend or her aunt who's tired of giving second chances ...When a kid shows up claiming to be Frankie's half brother it opens the door to a past she doesn't want to remember. And when that kid goes missing, the only person willing to help is a boy with stupidly blue eyes ...and secrets of his own. Frankie's search for the truth could change her life, or cost her everything.

One Would Think the Deep
Author: Claire Zorn

Sam stared at the picture of the boy about to be tipped off the edge of the world- the crushing weight of water about to pummel him. Sam knew that moment exactly, the disbelief that what was about to happen could even be possible. The intake of breath before the flood. Sam has always had things going on in his head that no one else understands, even his mum. And now she's dead, it's worse than ever. With nothing but his skateboard and a few belongings in a garbage bag, Sam goes to live with the strangers his mum cut ties with seven years ago- Aunty Lorraine and his cousins Shane and Minty. Despite the suspicion and hostility emanating from their fibro shack, Sam reverts to his childhood habit of following Minty around and is soon surfing with Minty to cut through the static fuzz in his head. But as the days slowly meld into one another, and ghosts from the past reappear, Sam has to make the ultimate decision a will he sink or will he swim.